atop is an extremely useful top-like utility that shows the current state of the system.

On top of its interactive, top-like (but top on steroids!) functionality, atop can capture (log) system state snapshots and then review them.

To start the recording use -w option with a file name and then the interval (in seconds) for each refresh, i.e.:

Later on, read the data from the log file:

Jump one interval forward by pressing “t”, to go backward press “T”. To jump to a specified time, press “b”.

How to set-up reliable autossh tunnel in Ubuntu 20.10

The idea is that a machine hosted anywhere - i.e. behind the NAT, with no public IP - will establish SSH tunnel to publicly available server. The only required connectivity is access to the server IP & port.

Then enable the service and reboot to make sure it works automatically.

Add to /home/tunnel/.ssh/authorized_keys the public key of the root user from our client (/root/.ssh/id_rsa.pub )

To access client machine, login to server and run:

Write an image to the microSD card

After plugging Raspberry Pi into my local network, it will receive a dynamic IP fom my DHCP server. I will find it by using nmap to scan my network. I’m looking for a PC with only SSH port open:

Now connect to RaspberryPI and go through the initial setup. The default user and password is ubuntu/ubuntu - you will be required to change it.

Note the password given at the end of the process, ie:

Go to group management -> Adlist and (optionally) change the default list of hosts - from https://raw.githubusercontent.com/StevenBlack/hosts/master/hosts into another one, if you want to filter more:

Then rebuild the database under Tools -> Update Gravity

Set up your local router

Setup your router (DHCP server) to point to the static IP of your pi-hole as a DNS server.

PSI stands for Pressure Stall Information and it’s an alternative to Linux load statistic that gives an insight into how and why your system is busy.

We will use it to identify where is a performance bottleneck in my web application - Moodle. My environment is a single server running Ubuntu 20.04 with PHP, Apache, MySQL and Redis.

I have run a jmeter test that emulates login and forum post by a number of users. While running the tests, I’m capturing load and pressure information:

The results of the first run are: 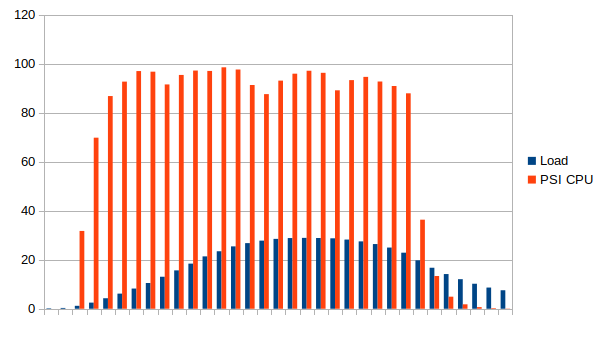 The load jumps up to 30 and CPU pressure reaches 99%. It means that at some point, 99% of the processing was not happening, because the processes waited for CPU to be available. It’s clearly a bottleneck on the CPU side. The low pressure numbers on the I/O side confirm that (I’m not even showing them on the graph as they are close to 0).

The result is the same:

But this time we see higher utilization of the I/O - pressure number reaches 70%. 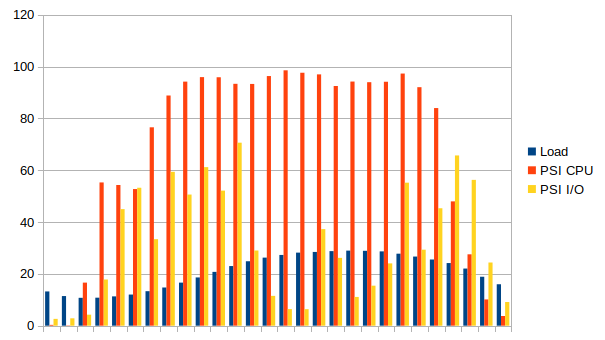 Let’s push it further and slow down the storage even more. This time we see a significant drop in the performance (from 2.2 to 0.7 requests per second) .

The CPU pressure is lower and full pressure I/O reaches 99%. This time the bottleneck is clearly on the I/O side.

Note that the information of CPU vs I/O is clearly visible when using PSI. The standard “load” information is not enough to distinguish between those two.

You can see PSI information with tools like “atop”.

Moodle’s performance information (can be enabled in Site administration -> Development -> Debugging) is very useful for troubleshooting your site performance. Sometimes just one look there will tell you where the (performance) problem is. But sometimes not.

The limitation of the current implementation is that the time and resources used by event-triggered logging action are not taken into account.

See the sample footer with the performance information:

It tells us that there were no DB writes performed. This can not be true, because there was a new row added to in mdl_logstore_standard_log table.

Let’s check if the time spent by the logging function is covered. I have edited function insert_event_entries in admin/tool/log/store/standard/classes/log/store.php - injected sleep(10); there:

After refresh - the information from the footer does not change! Moodle tells me it took 0.133499 secs to generate it, while it obviously took more than 10 seconds. Browser debugger confirms it:

How does the session locks work in Moodle (part 3)?

The problem with the session locks is that it may often cause the performance issues for the end users. Imagine that a teacher runs some complicated report. The report generation takes more than one minute. After just few seconds, the teacher gets bored and opens the course page in a new tab instead of waiting for the report. Loading the course page takes forever - this is because the web server has locked the session for the report generation. End-user experience is poor - they will complain that course loading page took a long time (and it did - even though the root reason for this was poor performing custom report).

Triggering \core\session\manager::write_close() will help a bit - we release the lock as soon as we can.

But we can go one step further here - mark some scripts (pages) as no needing the session lock at all. That is a new feature in Moodle 3.9 - READ_ONLY_SESSION implemented in MDL-58018. We promise here that the script will not write to the session.

We do it by declaring READ_ONLY_SESSION before including config.php:

The pre-requisites for the read only sessions are:

After running page1.php and page2.php one by one, I get the results:

No lock at all! The second script started running as soon as my request was received.

The new functionality is currently used in 2 places:

So - get the latest Moodle 3.9, enable $CFG->enable_read_only_sessions, use DB or Redis for your sessions and enjoy the benefits of no locking session calls.

How does the session locks work in Moodle (part 2)?

In part 1 we have learned how the session locks work in PHP. Now let’s apply it in the Moodle context.

We start with the simplest possible Moodle page. We only bootstrap Moodle, start, sleep for 5 seconds and finish.

I have created page1.php and page2.php both with the same content:

And then I have opened both in separate tabs. One after another. The results:

We can clearly see that the second script stated running only after the first one has finished. This is because Moodle has initiated the session while bootstraping. It happened when we included config.php.

Now let’s imitate the session_close() mechanism - in Moodle we can use manager::write_close():

Now when I run both scrips:

I have launched both of them in the same second. This time my code in the second script started just 2 seconds after the first one.

Closing the session is used in Moodle in several places. For example the last lines of the code in file.php - a script that is used to send a file to user, are:

This makes sense - imagine what would happen if sending a big file for the download would keep the session locked! A teacher would not be able to access any other page while downloading that big PDF assignment file.

The default and simplest implementation of session and session locks in your LAMP stack is the default PHP implementation - which means file based sessions. Moodle overwrites the location of the PHP session files, and you can find them in moodle_data/sessions directory. This is implemented in \core\session\file class.

If I run page1.php and page2.php at the same time, and I know the name of the session file, I can interrogate it on the server side:

fuser is showing me the IDs of the processes using the file. From lsof we can see that process 9953 has currently the session lock - as it has the writeable flag (W) set. So apache2 process 9944 must be waiting for the lock.

As administrator, you can go to “Site administration -> Server -> Session handling” and set “Use database for session information” (dbsessions). This will change the implementation of sessions to class:
\core\session\database

Now the session locks are handled by the database. Each driver will implement its own method, for example MySQL uses its RELEASE_LOCK() and PostgreSQL uses pg_advisory_lock() function.

There are other implementations of sessions, like memcached or redis. To switch to those, you need to configure $CFG->session_handler_class in config.php.

Have a look at the last part 3.

How does the session locks work in Moodle (part 1)?

The “problem” of session locking is not specific to Moodle. In general, the way web applications work is that any authenticated user will have his session data stored somehow on the server. At the beginnig of the HTTP request, his session data is retrieved and at the end of the request stored back.

What happens when the same user sends second request, before the first one finishes?

If PHP allowed the access to the same session for more than 1 request, then the data could easily get corrupted - by 2 separate processed reading & writing to it in parallel. So instead, the session is locked. The second request will get the session data only after the first requests finishes (and his session data is safely written).

To illustrate it - lets say we have 2 PHP scripts: sleep1.php and sleep2.php. They are exaclty the same and all they do is sleep for 5 seconds:

When I run them in the browser, one after another, in separate browser tabs I get the results:

I have run the second tab 1 second after the first one, both took 5 seconds to finish. Simple.

Now I replace the code of both with a call to session_start():

And just like before I open sleep1.php in the first tab and sleep2.php second:

To alleviate the problem caused by the session lock, we can voluntarily release the lock before we finish the script. Imagine that during those 5 seconds (we sleep now - but let’s pretend this is some work done), we can write back to session what we need after the first 2 seconds.

Then, during the remaining 3 seconds we do some other processing, that we know will not need to update the user’s session. To release the lock earlier, we can use session_write_close().

That’s better! Previously the time from start to end for script2.php was 9 seconds - 4 seconds waiting for the lock + 5 seconds of its own processing. Now the wait for the lock down to 1 second and script2.php run took 6 seconds. The second script gets the lock as soon as session_write_close() is called in the first one.

The session locking is sometimes problematic in applications like Moodle - because nearly all HTTP requests in Moodle come from authenticated users. Those users have the session created for them and therefore the locking described above affects them.

How to change the time after which unused LXD images are deleted?

When downloaded for the first time, LXD images are cached in /var/cache/lxc/download directory. If they are unused for images.remote_cache_expiry days, they are deleted. The default value is 10 (days).

To change it to something higher:

Bash to the rescue - a quick and dirty way. First check what will be deleted - just echo the “git push…” commands. In the example below we will look for all the branches with OLD_BRANCH in the name.

If everything looks OK, then actually run the commands: